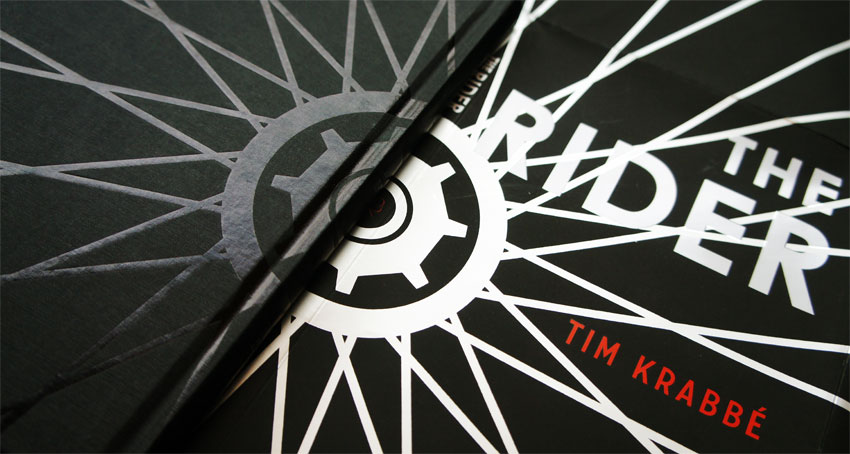 I first became aware of this book when I was reading Bert Wagendorp’s Ventoux. As the main character describes how his cycling obsession began “The urge to sit on a racing bike again came back later. That was after I had read The Rider by Tim Krabbé. I was 15, read it at one sitting, and knew instantly what I had to do.” With both books being originally written in Dutch I suppose it was inevitable that the later would mention the original Dutch cycling classic.

The Rider was originally published in 1978 (but wasn’t translated into English until 2002), so you may ask: Why am I writing a book review about a book that was written before I was even born? Simply because it has just been reprinted (quite beautifully in hardback from – see photo above) and I believe it is an essential read for the passionate cyclist.

The book follows the author through a fictional race (the Tour de Mont Aigoual) and the story is the inner monologue of the rider interspersed with flashbacks to previous races, references to cycling legends and a few other mind wonderings as fatigue sets in. The inner monologue worked well for me, the quick, short sentences, and wondering path of thoughts is something I can associate with. I’ve tried watching films on the turbo trainer or reading a book, but past a certain level of exertion my concentration is limited to these familiar short thoughts. Anything too verbose or descriptive would not portray the same urgency of the race and the effort of the rider. It gives just enough to let your imagination take hold of the narrative and let the action flow without dragging. With race tactics, attacks and a seemingly limitless raising of the pace it captures the tension quite beautifully, something not easily done with such short sentences. There is a passion or perhaps just an arrogance about this book, and I was drawn in by it.

Ideally this book is something that should be read in one sitting, but I’m afraid like most people I do not have the luxury of that much spare time. I read it over a few days, and as long as you are able to keep track of a hand full of riders’ names and positions then this is not really an issue.  I did have an overwhelming feeling that this is a book that I will read more than once, not something I can say about many books I have read. Whenever I need that little bit of motivation in the depths of winter, or can’t decide whether to do any races at all next season I will consult this book to see if it grabs my attention and steers my motivation.

The main question I ask myself when reading cycling books is: Did it make you want to ride your bike? And I can honestly say that yes it did, not only that but ride it hard and fast, legs and lungs burning ready to race. I did a bit of racing this year as well as touring and this definitely appeals more to the racing side of me. There were a few sections that really spoke to me; there are some very quotable lines in there. There are also a few tales from the “golden era” of cycling which just adds a bit more to this book and gives it a classic appeal. I’m sure people will be talking about Merckx, De Vlaeminck, Maertens, Anquetil, Hinault, and Coppi for many years to come so this book is as relevant today is it was in 1978.

Will this appeal to all cyclists? Probably the majority but not everyone. Not all of it worked for me, some of the mind wondering interludes didn’t engross me, but it’s one that will remain on my bookshelf as I will definitely be reading it again. Perhaps one day I’ll read it in one sitting (If I ever take a sick day – cycling keeps me too healthy). If you like to push yourself or do race then there is definitely more to associate with, or even inspire you. If you’re more about the slow steady scenery or have no interest in the legends of cycle racing then perhaps it’s not going to be 100% your cup of tea. Fully of tension and racing passion. It stops short of perfection, but is without doubt a classic.

2 thoughts on “Book Review – The Rider by Tim Krabbé”